Something for everyone in Ardern’s speech on China

Jacinda Ardern’s speech at the China Business Summit was a crowd-pleaser. Geoffrey Miller explains its role in the “rebalancing” of New Zealand’s orientation to China and the West.

For critics who believed she had gone soft on China, Jacinda Ardern’s line that differences between China and New Zealand were becoming “harder to reconcile” will be interpreted as tough talk. They will see the speech as backtracking and stepping back from what they considered an appeasement-like stance from Ardern’s foreign minister, Nanaia Mahuta.

For its part, China will be likely to understand Ardern’s speech as a necessary component of a wider act of foreign policy rebalancing by New Zealand. Ardern’s criticisms in her speech today largely amounted to a summary of New Zealand’s previous statements and actions with regards to China, with a few stern, yet ultimately rather vague words added on top. This is very different to calling for any further specific action to be taken against Beijing, in the vein of Australia’s call last year for an investigation into the origins of Covid-19.

A word cloud of Ardern’s speech tells the story of what was covered today – and what was not. Notably, a series of problematic issues were strategically recited, but not repeated or developed to any great extent. Ardern mentioned the word “Uyghur” – the keyword for one of the biggest issues for China’s critics – just once in her 2000-word speech. Another key phrase, “Hong Kong”, also received only a single mention, as did the word “democracy” – and the latter only being in direct reference to New Zealand. 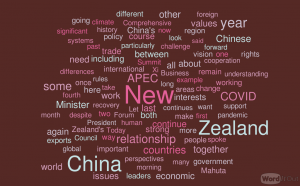 The bottom line is that New Zealand’s approach to China is changing. A rebalancing is taking place. From 2017-20, New Zealand took a particularly pro-Western and pro-US stance. This was largely driven by foreign minister Winston Peters, the leader of the Labour Party’s then smaller coalition partner, New Zealand First. After winning an absolute majority at the 2020 election, Labour is now free to chart a new foreign policy course – which Ardern and Mahuta now sum up simply as an ‘independent foreign policy’.

To be clear, the new Ardern and Mahuta foreign policy doctrine is likely to be more nuanced and less enthusiastic than either the pro-US stance driven by foreign minister Winston Peters from 2017-20, or the pro-China stance that National took from 2008-17, under Prime Ministers John Key and Bill English and foreign minister Murray McCully.

This is because Wellington cannot overlook Beijing’s growing assertiveness in the wider region, despite its desire to shift to more of a middle-ground that straddles the rival power blocs. Concerns that Winston Peters expressed on New Zealand’s behalf over China’s growing role in the Pacific remain.

Significantly – and in another example of careful speechcraft – Ardern’s speech today used the term “Indo-Pacific” to refer to the Asia-Pacific. The Indo-Pacific phrasing has been pushed heavily by the US and Australian foreign policy establishment since at least 2013 as a less-than-subtle way of signalling a new approach to considering the region. In New Zealand, the term only came into more common use more recently, when it was used by Winston Peters under his more China-critical “Pacific reset” agenda.

For a domestic New Zealand audience, Ardern’s emphasis of an “independent foreign policy” in the speech will play well. The stance builds upon and calls to mind a pre-existing Labour foreign policy legacy. Its pedigree includes the tripartite of events that took place under the Fourth Labour Government in the 1980s – the introduction of a nuclear-free policy in 1984, the sinking of the Rainbow Warrior in Auckland Harbour in 1985 and New Zealand’s suspension by the United States from the Anzus defence alliance in 1986.

But Ardern’s new positioning also recalls the foreign policy line of her immediate Labour predecessor Helen Clark under the Fifth Labour Government. Under Clark, New Zealand became the first Western country to sign a Free Trade Agreement (FTA) with China in 2008. But the Clark government also emphasised New Zealand’s independence in other areas – such as through its opposition to the Iraq War in 2003 and by refusing to acquiesce to Australian demands over New Zealand’s immigration policy in 2001.

Ultimately, Jacinda Ardern’s first major foreign policy address of her government’s second term was strategic and smart. The speech clearly met its main objective, which was the need to deliver remarks that would mollify the government’s China critics. But Ardern and her advisors have also succeeded in delivering a message that will satisfy several other key audiences at home and abroad – including in Beijing itself.

Geoffrey Miller is an international analyst at the Democracy Project. He has lived and travelled extensively in the Middle East and is a fluent Arabic speaker.