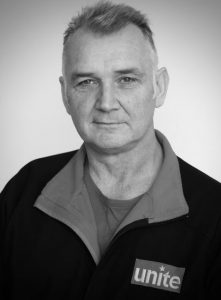 The National Secretary of the Unite union, Gerard Hehir, says government departments are failing to ensure low-paid hotel cleaners are given personal protective equipment while the hotels are housing returning New Zealanders in quarantine.

Hehir gave the Democracy Project podcast an example of a Christchurch hotel which told its employees that they could wear protective equipment, but only if they supplied it themselves.

Hehir, whose union mainly represents workers in primarily low-paid jobs in the hospitality industry, said the situation was “outrageous”.

“The Ministry of Health generally are supplying protective gear, but what we’ve found is that there are other contracts with Police, MBIE [the Ministry of Business, Innovation and Employment] and with other government departments and they are having more difficulties getting this gear.

“These are hotels, not hospitals. They haven’t got the culture to deal with this sort of quarantine situation and hygiene situation. We’re not sure that anyone is actually checking on them. The state needs to make sure the gear is provided, that it’s being done; it has to monitor that the procedures are being followed. The managers don’t really know about it, the workers don’t know about it, and they’re not even aware of the risk.”

Hehir told the Democracy Project podcast that the lockdown was also posing severe challenges to the union, as it was now impossible to physically visit workplaces to check on Unite members.

“We pick up on a lot of the big issues when we go and talk to workers at the worksite and they tell us ‘this has happened’ and you go, ‘that’s not right, we need to fix it’.”

The union leader also said that the public sector was failing to protect its own workers, in part because the wage subsidy scheme covers the private sector only.

“In the private sector you can go to the wage subsidy scheme, but in the public sector, there is no subsidy scheme. They are supposed to do it out of existing budgets. We’ve got workers at hospitals, we’ve got workers who are saying ‘well hold on, I can’t work, I don’t want to risk my family by working, what happens to my pay?’

“So far a lot of them have been told: ‘you’ve got to use your leave’. That’s not good enough. Workers who have a genuine and legitimate reason why they should not take risks with their health, or their family’s health, should be able to be in lockdown like everyone else, to protect themselves.”

But Gerard Hehir praised the overall structure of the government’s wage subsidy scheme.

“The principle and the idea is good, it’s very good. The way it was done made sure that that money went to the workers, unlike in 2008 when the money was going to finance companies and banks. This time it’s going to low-paid workers, to retain their jobs, retain their employment and give them some income.

“Just in our union, I would say over 1000 jobs are around today that wouldn’t have been around last week, so it has had a big impact and I’m sure that’s across the economy.

“I’d give them [the government] 8/10 for the subsidy…generally it was good, but it does require a lot of policing and pressure to keep it on track.

But Hehir said it was noticeable that companies in New Zealand ownership or at least managed here were much more willing to use the subsidy scheme, rather than simply lay off staff.

Call for government intervention over supermarkets

The Unite union head also told the Democracy Project podcast that the union’s low paid members, already hit hard by the lockdown, were also suffering from higher costs of living due to increased food prices at supermarkets.

“People are reporting 20-30% increases for the same basket of goods, that’s massive. The government should step in.

“Those supermarkets have been making a killing. It’s been Christmas every day, the week before Christmas when they make their highest turnover, it’s been like that every day for weeks.”