Winston Peters has made his first comments on the ongoing crisis in Belarus, following rigged elections in the country often referred to as ‘Europe’s last dictatorship’.

Belarus’s President, Alexander Lukashenko, is refusing to give up power despite days of mass protests following presidential elections that have been widely seen as fraudulent. Official election results from the August 9 vote saw Lukashenko win 80% of the vote. There have been widespread allegations of vote-rigging in the Eastern European country.

The main opposition leader, Svetlana Tikhanovskaya, remains in hiding in neighbouring Lithuania after fleeing the Belarusian capital Minsk in the days following the disputed election. Her husband Sergei Tikhanovsky, a prominent blogger, remains imprisoned in Belarus after he was prevented from standing for election himself.

“New Zealand is deeply concerned by recent events in Belarus. Free and fair elections, freedom of expression and freedom of peaceful protest are fundamental to a healthy democracy and must be protected rather than suppressed,” Peters wrote on Twitter.

New Zealand is deeply concerned by recent events in Belarus. Free and fair elections, freedom of expression and freedom of peaceful protest are fundamental to a healthy democracy and must be protected rather than suppressed.

Peters’ tweet puts New Zealand’s response ahead of Australia, where neither Prime Minister Scott Morrison, nor foreign minister Marise Payne appear to have made any comments on either the election result or the ensuing violence meted out against protesters by Belarus’s Lukashenko regime.

However, Winston Peters’ remarks are much less forceful than countries such as Canada, which has issued two separate official statements about the crisis. The Canadian foreign minister, François-Philippe Champagne, released his most recent statement on Monday, expressing its “condemnation of the crackdown on peaceful protesters”.

Canada condemns the crackdown against peaceful protestors following the presidential election in #Belarus.

Canada does not accept the results of this fraudulent presidential election. We call for free & fair elections & a thorough investigation by the @OSCE.

Some 6000 protesters are said to have been imprisoned since the August 9 vote, with many beaten in prisons and detention centres that human rights organisation Amnesty International has likened to ‘torture chambers’.

But speaking to the Democracy Project podcast from the Belarusian capital Minsk, human rights activist Aleksandra Dikan said that more moral support from New Zealand would be welcome, despite the physical distance and differences between the two countries.

“It would mean a great deal to us. The more countries that support us, even this verbal support from abroad, it gives a great deal of help to us protesting here in Belarus. It puts pressure on Lukashenko. I’m sure he will see all this support for Belarusian civil society and people.”

“[Belarusian President Alexander Lukashenko] must understand that he is not welcome in any country. He should hear – the more the better – that he is a dictator, he is a killer, he tortures people here. The more countries that support us, the more it attracts attention.” 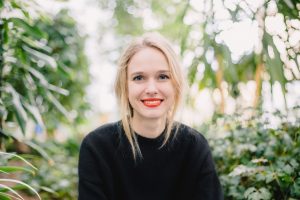 Aleksandra Dikan, who is the founder of the Belarusian non-governmental organisation (NGO) “Center for Promotion of Women’s Rights – Her Rights”, says support from New Zealand Prime Minister Jacinda Ardern would hold special significance.

All three main opposition candidates in the August 9 election were women, including key figure Svetlana Tikhanovskaya.

“Democratic leaders have some responsibility to support those who try to build democracy, especially female leaders.

“Svetlana Tikhanovskaya wasn’t a politician. She did not have any plans to become president whatsoever. But what she did and how she did it is amazing. I think the whole world right now should support her.

“The torture and blackmail she has undergone is awful. [The Lukashenko regime] took her into a building in Minsk and they showed her videos of her children….they showed her a video of her husband being beaten and then they shoved the gun near his head.

“Can you imagine this happening in the 21st century and what this woman has undergone? The whole world should support her.”

Aleksandra Dikan and fellow activists in Minsk are currently trying to challenge the fraudulent election results through the courts by filing administrative appeals. As part of this, the activists are looking for evidence of officials who did not sign off on fraudulent official result filings, who are thought to be sympathetic to the opposition movement.

But Dikan told the Democracy Project podcast these individuals are coming under threat by the Lukashenko regime.

“The day before yesterday one member of the election committee who did not sign this protocol died, somehow, and then all his posts on Facebook disappeared.

“Even people who do not do any activism, they are super scared. They stay in their houses or apartments and say that they are afraid to go out, especially in the evenings.” 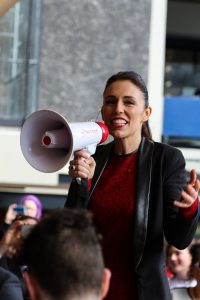 The Belarusian activist’s own husband and brother were imprisoned during the protests before later being released.

“My husband was imprisoned in July and it was super stressful but now I see that maybe he was even a bit lucky that he was put in jail in July. 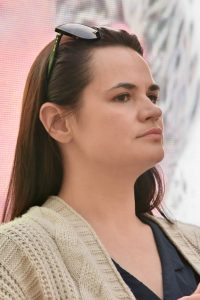 “Because in August during the elections, the protests, I talked to him and said ‘you’d better not go out’ because they threatened people that if you’re detained the second time for the same offence, the same administrative crime, you could be jailed for up to eight years. So basically we decided that I would go out in August and he would stay with our son.

“We are super scared…I am afraid every minute that they will come to our house and do something bad to us or our child. We understand that we do not want to live in a country where we fear every police car and every policeman. We saw what they were doing. People are scared to go out into the streets.”

Observers of the crisis in Belarus are closely watching the reaction of Russia, which borders Belarus to the east and which has traditionally had a close relationship with its western neighbour.

Vladimir Putin has so far sent mixed messages to the Lukashenko regime, after tensions grew in recent years between the traditional allies. 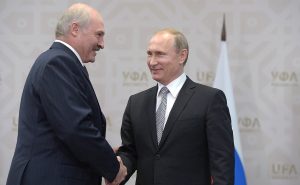 Aleksandra Dikan told the Democracy Project podcast that the wishes of the Belarusian people are clear.

“The majority of Belarus does not want to be under Russia. And Russia also understands that they cannot easily bring forces to Belarus.

Dikan says the alleged poisoning of prominent Russian opposition figure Alexei Navalny, who has been highlighting the significance of the Belarus protests for Russia via social media, could be a warning sign from Vladimir Putin.

“It’s hard to say, but it might be. I’ve watched Alexei Navalny’s videos, he’s showed what’s happening in Belarus, the protests. He showed Russian people an example and described every step about what was done well in Belarus, in terms of protesting and everything.

“It could mean that Russian people could follow the example of Belarus. Russian people look at Belarus a lot…they know what’s happening in Belarus, they’re interested in what’s going on in Belarus.”

Despite the current situation, Aleksandra Dikan remains optimistic about Belarus’s future, pointing to the unity of the opposition that is struggling against the Lukashenko regime.

“The new opposition at the moment is the whole population, the majority of the people. The people of Belarus are united, the majority of people are united, we are against Lukashenko, we did not elect him. Svetlana Tikhanovskaya won…There is such a unity that we’ve never seen before in Belarus.”

Meanwhile, the small Belarusian community in New Zealand, estimated to number around 100 people, have been voicing their support for the opposition movement. 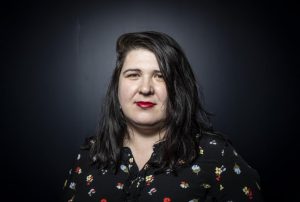 Tatsiana Chypsanava, a Belarusian who now lives in Nelson, told the Democracy Project podcast that the community “has done everything possible” to make New Zealand politicians aware of the crisis in their home country, including writing to local MPs and the Ministry of Foreign Affairs and Trade, as well as Winston Peters and Jacinda Ardern.

“There is a possibility of a huge humanitarian crisis in Belarus. If things do not go as everyone wishes in Belarus, many will try to emigrate or apply for asylum in other countries…I look at Jacinda Ardern, as one of the most successful leaders in the world.

“Our democracy has just been born in Belarus. I would like to see Jacinda supporting it.”

Belarusians in New Zealand show solidarity with the people of #Belarus. We admire courage of peaceful protesters and call for international community to condemn violence and unfair election. Thank you for being vocal about it @HelenClarkNZ @GeoffMillerNZ#ЖывеБеларусь pic.twitter.com/HXV86nMStJ 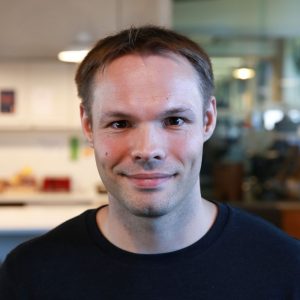 Chausov told the Democracy Project by e-mail that he was grateful for Winston Peters’ tweet of support, but believed that it was “not enough”.

“Why not join other countries – the UK, Canada, the EU – and say what we think?

“If someone is neglecting our core values, freedom of speech, peaceful protests, the right to vote on fair elections, killing innocent people we should speak out against it.”