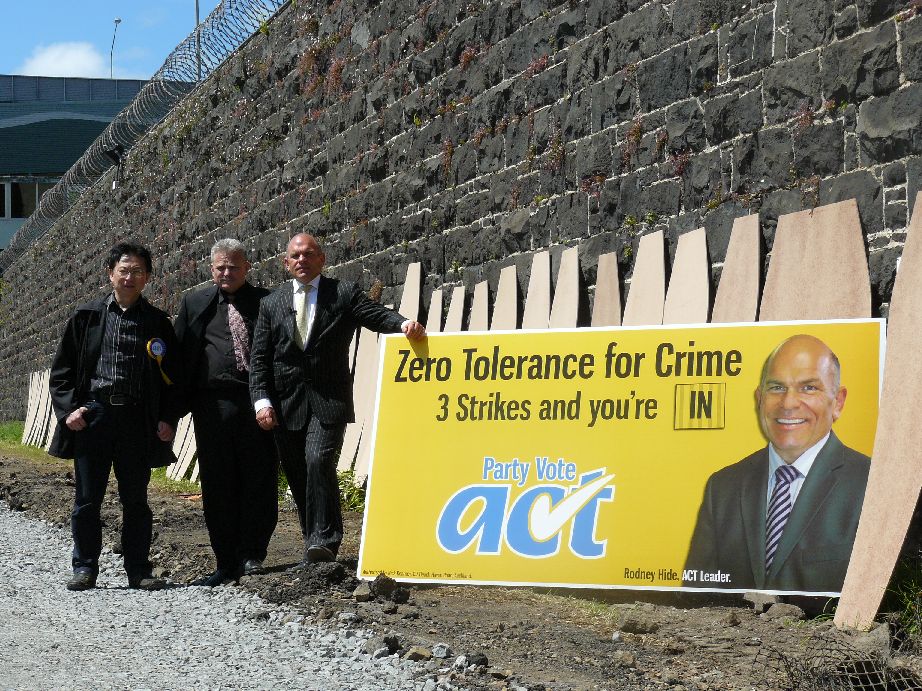 A supporter of most ACT policies was kind enough to send me some photos of the party’s weekend campaign event. Some refreshing honesty here: even the supporter described it as a “stunt”. As the photo shows, it involved putting up 77 cardboard coffins to represent victims of violent crime who would have been “saved” had ACT’s crime policy been in place.

Visual representations like this are designed for television and are not a stupid idea by any means. There was talk at ACT’s conference in March of carrying out similar exercises for economic matters. The obvious one would be to pile up a stacks of money to a certain height to show how much other parties’ spending plans would cost per second/minute/year. However, in recent weeks ACT seems to concluded that its economic plans are unsaleable to swing voters and has switched to a heavy emphasis on crime instead. Hence Sunday’s stunt.

Unfortunately for ACT, the stunt seemed to go largely unnoticed – neither the Herald nor Stuff websites seemed to carry a report, according to a search of Google News. The notable exception was a piece on 3 News, which I thought gave some sympathetic coverage of ACT’s campaign. Organisers of the stunt would have been delighted that prison staff tried to shut down the event – being attacked always generates more heat.

Intriguingly, the 3 News reporter told viewers that a recent poll of polls found ACT was on track to gain 3 MPs in the next Parliament. I’m not sure whether this came from ACT itself, but I’ve been watching Curiablog’s summary and thought ACT had been stuck on 2 MPs for some months now (although it did rise to 3 earlier in the year).

What to make of the billboard itself? Considering John Ansell parted ways with ACT earlier in the year (although as he said he would still help the party in certain ways, perhaps he did have input), I think it’s not a bad effort. But there are some flaws. I like the alteration to the “three strikes and you’re out” message which is not new and in fact extremely tired. By replacing “out” with “in”, anyone who reads the billboard will do a double-take, driving home the idea even more strongly. (Although I’m sure it will still wash over some). The simple ACT logo with the big party vote message is also bold and effective – mercifully the ineffective and immemorable “The Guts to Do What’s Right” slogan introduced earlier in the year has been dropped (looking at the ACT website this seems to have been a uniform decision).

However, I wonder why we need a smiling face of Hide plastered over half the billboard. Sure, he is the party’s most recognisable figure by a long way. But his jovial picture just jars with the harsh message of the billboard. You don’t want a snarling Hide either – so I suggest leaving him out altogether. You can’t vote for Hide on the party vote, so let the party stand alone for once. A pair of hands with handcuffs on them – a la ACT’s 2002 billboard – would have been a good substitute. Save pictures of Hide for either billboards asking for the electorate vote in Epsom, or for billboards with positive messages, such as “ACT to make NZ wealthy again” or whatever.

Last thought – when I first glanced at the photo I was sure the middle figure was Stephen Franks. (Actually David Garrett).

It would have been right up Franks’s alley.